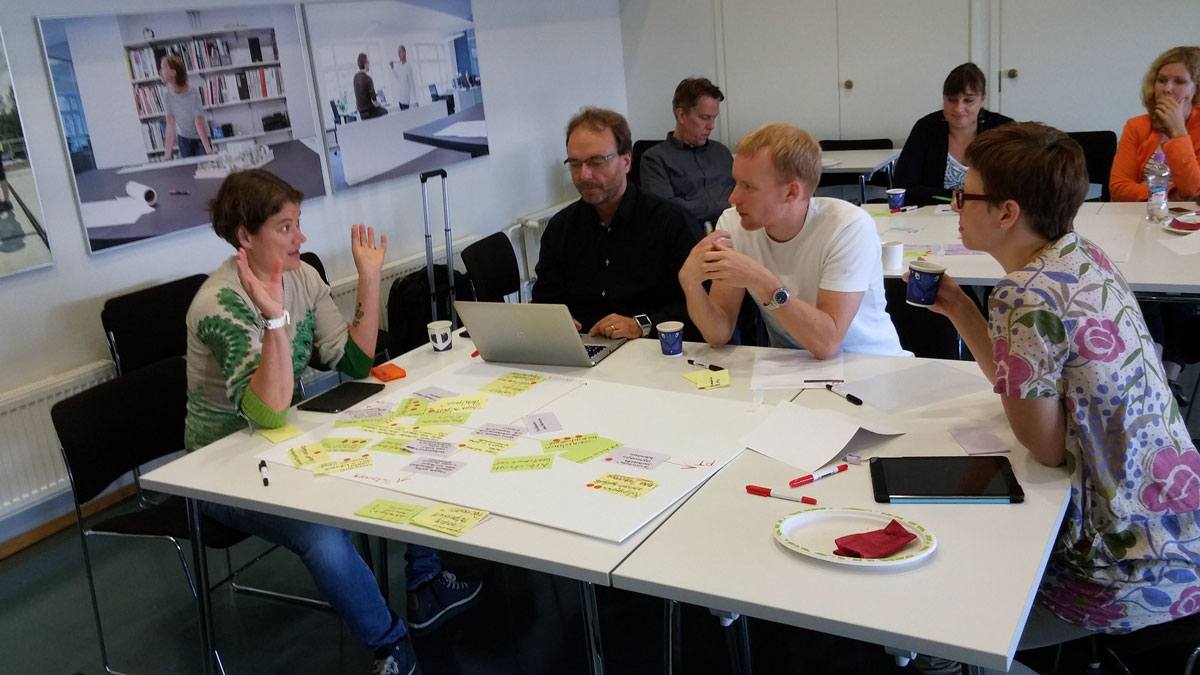 buildingSMART Finland is a collaboration forum that brings together clients, contractors, software vendors and consultants to advance the active use and promotion of open-data standards in the construction industry. The infrastructure industry group of buildingSMART Finland commissioned me to help define a vision and develop a strategy for the group.

In addition to working with companies, I’ve helped trade associations and non-profit organizations with strategic planning. What makes these clients different is that their operations often rely on voluntary work, and the business benefits of the collaboration are not direct or short term. An energizing but realistic vision is a very important driver in associations.

Starting off with a picture of the future

buildingSMART Finland (bSF) already had a documented vision: a business environment where building information modeling is fundamental in the management of the built environment. We used this vision as a starting point for an online ideation process.

I set up a so-called idea wall, an online tool for idea sharing. I asked the steering group of the infrastructure industry group the following question: “How will the world have changed when the bSF vision is realized? Please concretize the vision from the following points of view and share your ideas on the idea wall.” The four viewpoints were:

The purpose and vision workshop

The first workshop of the steering group was held in mid-August 2014. It was a round-table discussion.

I started with an introduction of the process and its goals. The workshop’s task was first to define the purpose of the group and then the buildingSMART vision for this particular industry area.

I had devised a mind map from the idea wall entries. From the mind map, the group identified the most critical issues for each of the four points of view. During the workshop, we defined the purpose of the industry group and a compelling vision. 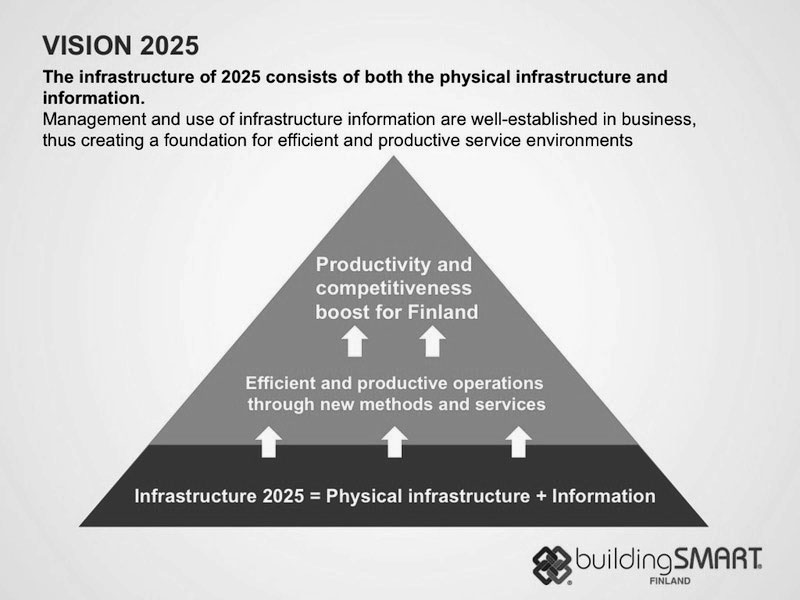 Using the mind map, we formulated the industry group’s purpose: “the flywheel of built infrastructure.” To keep the wheel rolling, the group has three main means: foresight, systematization and transformation. The hub of the wheel is value from co-operation. After the workshop, I made a visualization of the wheel.

The other half of the workshop was about the vision. I facilitated the lively discussion and tried to crystallize the ideas. The attendees were really resourceful and the key concept materialized. The Finnish infrastructure in 2025 would consist of both the physical infrastructure and information. This would allow the creation of new businesses and make operations efficient. As a consequence, the country’s competitiveness and productivity would be given a boost. The visualization of this logic was quite easy.

The next workshop was in September. This time the group was larger, consisting of the whole industry group.

We sent the attendees the results of the first workshop, some instructions and a preparatory task. Everybody had to consider the benefits that their own organization wanted to get from the collaboration from these three viewpoints: 1) foresight, 2) systematization and 3) transformation. They had to write these down and present them in the workshop.

We divided the large group into six small teams. Each team got a 70 by 100 centimeter board and sticky notes. On the board they drew an xy chart with the x-axis denoting short term vs. long term, and the y-axis indicating external vs. internal. 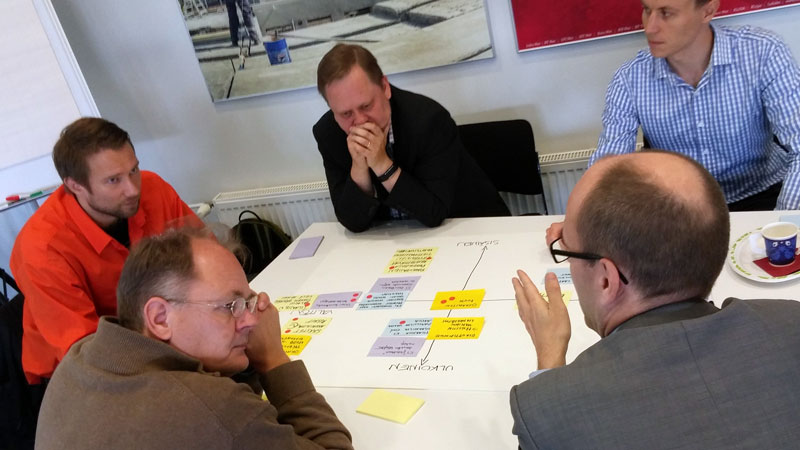 At first, the team members shared their own goals. After they had some time to think about the challenges they faced in reaching these goals, each team member wrote their issues on sticky notes and placed them on the board, at the same time explaining them to the other team members.

Once the team had the board ready, each member was given five stickers, representing funds, and placed them on the problems that they would solve if they had the resources.

Finally, the teams explained their results to the other teams, focusing on the issues that the team had found most critical. During the presentations, I made my own digital board to record the main points. Together, we organized the issues into seven categories.

During the rest of the workshop, we discussed five key strategic questions fairly quickly, since the answers at this point were quite clear. The topics were: arenas, vehicles, value, economics and staging. After the workshop, I created a visual strategy map of the results.

The roadmap and planning workshops

The steering group gathered twice to define a roadmap reaching from the present up to 2025. The roadmap has five lanes that lead to the five key goals. The lanes are:

The actions in the short term are naturally more precisely defined than in the long term. The long-term projections have value since development and transformation take years and it is important to focus the limited results on the right issues. 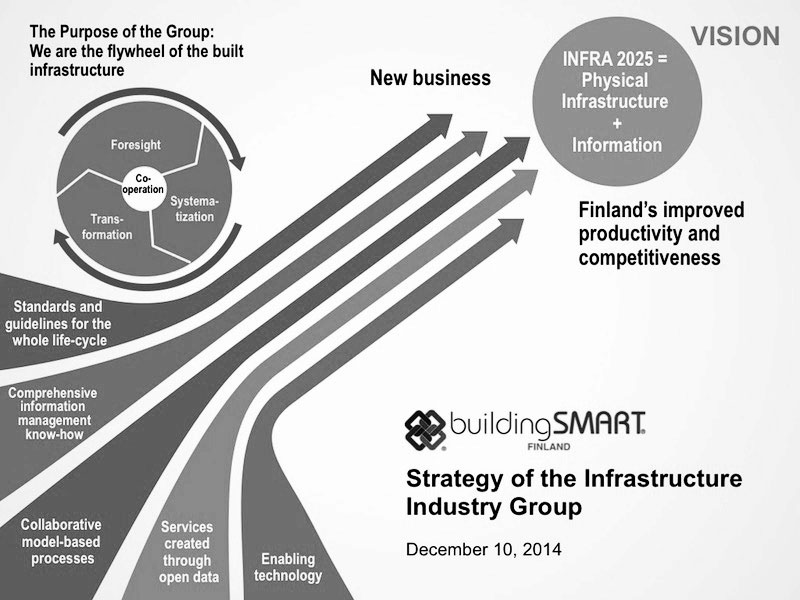 The group approved the final results on December 10, 2014. Based on the feedback that I received from the industry group, the vision and strategy work was a worthwhile effort and created better than expected results.

Since the industry group has representatives from both clients and suppliers, the prospects of a successful implementation of the strategy are promising.

Aarni on The Placemaking Podcast

We Live-streamed an AI Conference

Manage Cookie Consent
To provide the best experiences, we use technologies like cookies to store and/or access device information. Consenting to these technologies will allow us to process data such as browsing behavior or unique IDs on this site. Not consenting or withdrawing consent, may adversely affect certain features and functions.
Manage options Manage services Manage vendors Read more about these purposes
View preferences
{title} {title} {title}
Share This